It’s last week at school, but Simon’s not studying for his finals. His parents have divorced and seem to be waiting for a change that never comes. Simon gets tired of waiting. Could he get a one-way ticket to the USA? The young man’s concerns are composed of three chapters filmed over five years, interspersed with North American images of homeless teens.

Presented at San Sebastián Film Festival and at IndieLisboa. 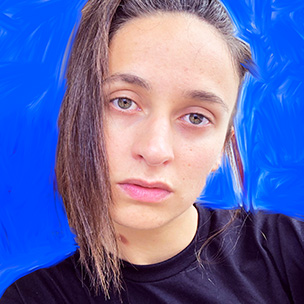 Born in Lisbon in 1992. In 2011, she interrupted her cinema course in Lisbon’s Film & Theatre School to enrol in drawing and painting, the same year that she directed AmareloAzulPretoAmarelo, her first short film. She produced, among others, Pedro Cabeleira’s Verão Danado (2017) and Ama Romanta (2019), by Vasco Bação. Simon Calls is her first feature film.

Vengeance Is Mine, All Others Pay Cash

Ajo Kawir is a fighter who fears nothing, not even death. His raging urge to fight is driven by a secret —his impotence. When he crosses paths with a tough...

Starting to work part-time at a cafe after quitting the job as a curator at an art museum, Sachi has moved to an apartment room where a regular at the cafe...

In this journey, a intergeracional exchange begins with Portugal as the backdrop. The director and his young daughter saunter trying to understand the country they...