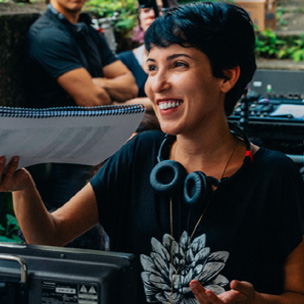 Born in Rio de Janeiro, Brazil, in 1985, she graduated in cinema from the Pontifícia Universidade Católica (PUC-Rio). Anita made short films like Handball (2010), which won the FIPRESCI Award at the Oberhausen Short Film Festival, and The Living Dead (2012), presented at Cannes Directors’ Fortnight. Her first feature, Kill me Please (2015), was screened at the Orizzonti section at Venice International Film Festival and at the 39th Mostra. Medusa is her second feature film.

Today, Brazil. Mariana, 21 years old, belongs to a world where she must do her utmost to keep up the appearance of a perfect woman. In order to resist temptation...