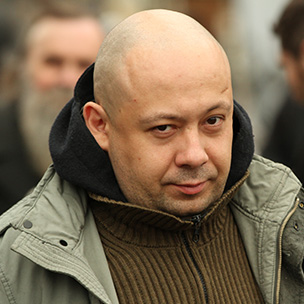 Born in 1976 in Moscow, Russia. He studied at the Russia Film School (VGIK) and made his feature film debut with The Last Train (2003). He also directed Garpastum (2005), Paper Soldier (2008), winner of the Silver Lion for best director at the Venice Film Festival, and Under Electric Clouds (2015, 39th Mostra) and Dovlatov (2018), both awarded with the Silver Bear for outstanding artistic contribution at Berlin International Film Festival.

David, a university professor, takes to social media to criticize his city’s administration. But instead of the mayor’s dodgy dealings being...