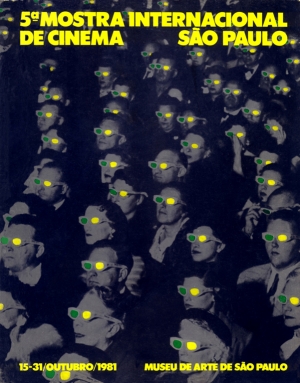 Even more polemic! Films like “W.R. – Misterije Organizma”, by Dusan Makavejev, and “Saló - The 120 Days of Sodom”, by Pasolini, were applauded by the critics and the public. One of the most marked facts of the year was that the political prisoner and Kurd director, Yilmaz Guney, was released in order to attend the Festival in São Paulo. However, instead of coming to Brazil, he fled to Switzerland to finish the film "Yol", awarded the Golden Palm in Cannes and showed at the Mostra in 1982. The Public Choice Award: “Montenegro or Pigs and Pearls” by Dusan Makavejev (Sweden/Yugoslavia). Critics Award: “Possession” by Andrej Zulawski (West Germany/France). José Zaragoza is for the first time the artist responsible for this year`s posters, an incentive for 3D cinema.

Every Man for Himself

In Defense of the People

Montenegro or Pigs and Pearls