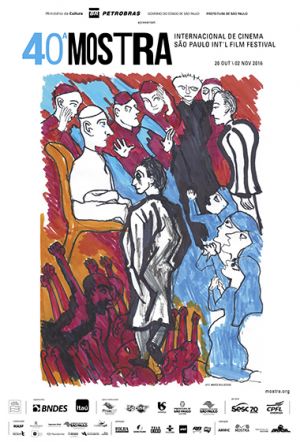 From October 20th to the November 2nd, occurred the traditional São Paulo International Film Festival. For two weeks, 322 titles were exhibited in 35 addresses, amongst cinemas, cultural centers and museums around the capital city, including free outdoor screenings.

76 MINUTES AND 15 SECONDS WITH KIAROSTAMI

A CONSPIRACY OF FAITH

A FLAG WITHOUT A COUNTRY

A FLAG WITHOUT A COUNTRY

A HOUSE IN NINH HOA

A LULLABY TO A SORROWFUL MYSTERY

A PERFECT DAY TO FLY

A WOMAN AND THE FATHER

ALL THESE SLEEPLESS NIGHTS

ARLETTE. COURAGE IS A MUSCLE.

AXÉ: MUSIC OF A PEOPLE

BETWEEN SEA AND LAND

BLOOD OF MY BLOOD

CAPOEIRA, INSIDE THE GAME

CINEMA, MANOEL DE OLIVEIRA AND ME

DEVIL IN THE FLESH

EXODUS - WHERE I COME FROM IS DISAPPEARING

FISTS IN THE POCKET

I PUGNI IN TASCA

FROM THE CITY OF LODZ

A GLÓRIA E A GRAÇA

HOW I FELL IN LOVE WITH EVA RAS

IN THE NAME OF HONOR

IN THE NAME OF HONOR

KING OF THE BELGIANS

KING OF THE BELGIANS

LANDSCAPE AFTER THE BATTLE

LIFE ON THE BORDER

LIFE ON THE BORDER

LOOKING AT THE STARS

LOVE AND OTHER CATASTROPHES

LOVE IS THICKER THAN WATER

LOVE IS THICKER THAN WATER

MARIE AND THE MISFITS

MY BROTHERS AND SISTERS IN THE NORTH

NO LONGER OUR HOMELAND

NO LONGER OUR HOMELAND

QUIT STARING AT MY PLATE

SHOT! THE PSYCHO-SPIRITUAL MANTRA OF ROCK

SHOT! THE PSYCHO-SPIRITUAL MANTRA OF ROCK

SOPHIE AND THE RISING SUN

SOPHIE AND THE RISING SUN

THE BIRTH OF A NATION

THE BIRTH OF A NATION

THE CAUSE AND THE SHADOW

A CAUSA E A SOMBRA

THE CITY OF THE FUTURE

A CIDADE DO FUTURO

THE DAY WILL COME

THE DREAM OF WATER

THE FIGHT OF THE CENTURY

A LUTA DO SÉCULO

THE GIRL WITHOUT HANDS

THE HAPPIEST DAY IN THE LIFE OF OLLI MÄKI

THE MAIDS OF WILKO

THE ROAD TO MANDALAY

THE ROAD TO MANDALAY

THE SUN, THE SUN BLINDED ME

THE SUN, THE SUN BLINDED ME

THE TIGER AND THE GAZELLE

THE TORTOISE AND THE TAPIR

THE WONDERFUL KINGDOM OF PAPA ALAEV

TO THE LEFT OF THE FATHER

TODAY TOGETHER, TOMORROW TOO - PARTICIPATED FILM

WE SHALL HAVE A CHILDHOOD

WHAT`S LEFT OF MY LIFE

WHERE IS ROCKY II?

WHERE IS ROCKY II?

WRÓBLEWSKI ACCORDING TO WAJDA