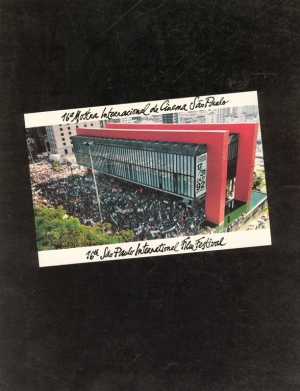 The Mostra becomes involved in the impeachment movement. This is clearly portrayed by Eder Chiodetto and Rudi Böhm`s art on the Mostra`s poster. It is rather curious that Quentin Tarantino took part in the Festival as a first-time director with the film “Reservoir Dogs”. Public Choice Award: “Kodayu” by Juny Sato (Japan). Critics Choice: “Proof” by Jocelyn Moorhouse (Austrália). Mostra`s Special Award was won by Peter Cohen for the film "The Architecture of Doom", by Peter Cohen (Sweden), which was later a big hit.

A Formula for Mayhem

A Formula for Mayhem

Being at Home With Claude

Being at Home With Claude

Changing Our Minds: The Story of Dr. Evelyn Hooker

Changing Our Minds: The Story of Dr. Evelyn Hooker

Days of Being Wild

Dial N to Be Born

Everyone Wants to Help Ernst

How to Survive a Broken Heart

In Cauda Venenum in the Tail Lies the Venom

Damned in the Usa

Memory of the Water

Once Upon a Time

Once Upon a Time

Phantom of the Cinema (Popcorn)

Roy Rogers: The King of the Cowboys

St. Paul and the Tarantula

The Emperor`s Naked Army Marches On

The Games of the Invisible Messages

The Kings of Siam

The Kings of Siam

The River With No Bridge

The Tears of Maria Machita

The Way We Are

Those Where the Days

Twin Peaks: Fire Walk With Me

Twin Peaks: Fire Walk With Me

When Mrs. Hegarty Comes to Japan

Zombie and the Ghost Train